Canadian real GDP rose 0.1 per cent in September, up for the eighth consecutive month. Goods-producing sectors rose 0.3 per cent while services-producing industries were essentially flat. Canadian real GDP is now roughly 2.8 per cent above its pre-pandemic, February 2020 level. Preliminary estimates suggest that output in the Canadian economy was unchanged in October.

Growth in the third quarter of 2022 registered 2.9 per cent at an annualized rate from the prior quarter, rising for the fifth consecutive quarter. Businesses continued to expand their inventories, while retail and wholesale trade sectors recorded higher stocks of motor vehicles. Housing investment fell 4.1 per cent on higher interest rates, as home renovations (-6.6 per cent) and resale activities (-13.8 per cent) were down for the second and third consecutive quarters respectively. In contrast, new construction (+2.4 per cent) and business investment in non-residential structures (+2.8 per cent) both rose. Exports were up 2.1 per cent on higher oil production while household spending edged down 0.3 per cent in the third quarter, the first decline since the second quarter of 2021.

GDP growth in the third quarter, though beating the Bank of Canada’s expectations, continues to show signs of slowing. The slowdown in GDP growth will likely continue into 2023 as the bank continues and then perhaps concludes its tightening cycle. The Bank is expected to raise its overnight rate again at its upcoming rate announcement on December 8th, but analysts expect the pace of hikes to slow following that meeting. Currently at 3.75 per cent, we expect the overnight rate to increase another 50 to 100 basis points. GDP growth will remain slow, particularly in interest rate sensitive sectors like housing, while the bank continues to increase rates. 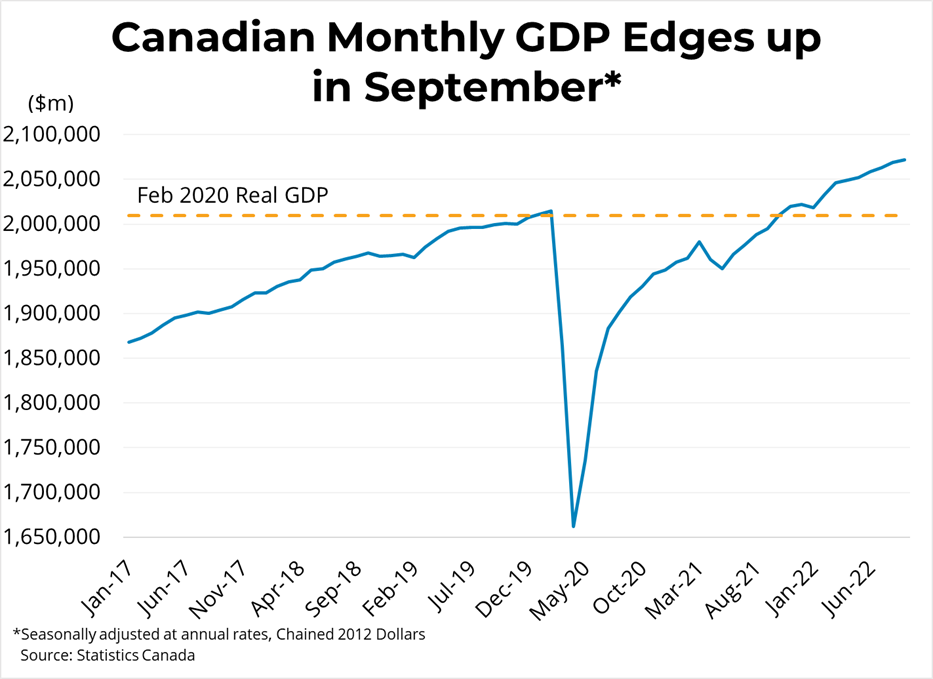