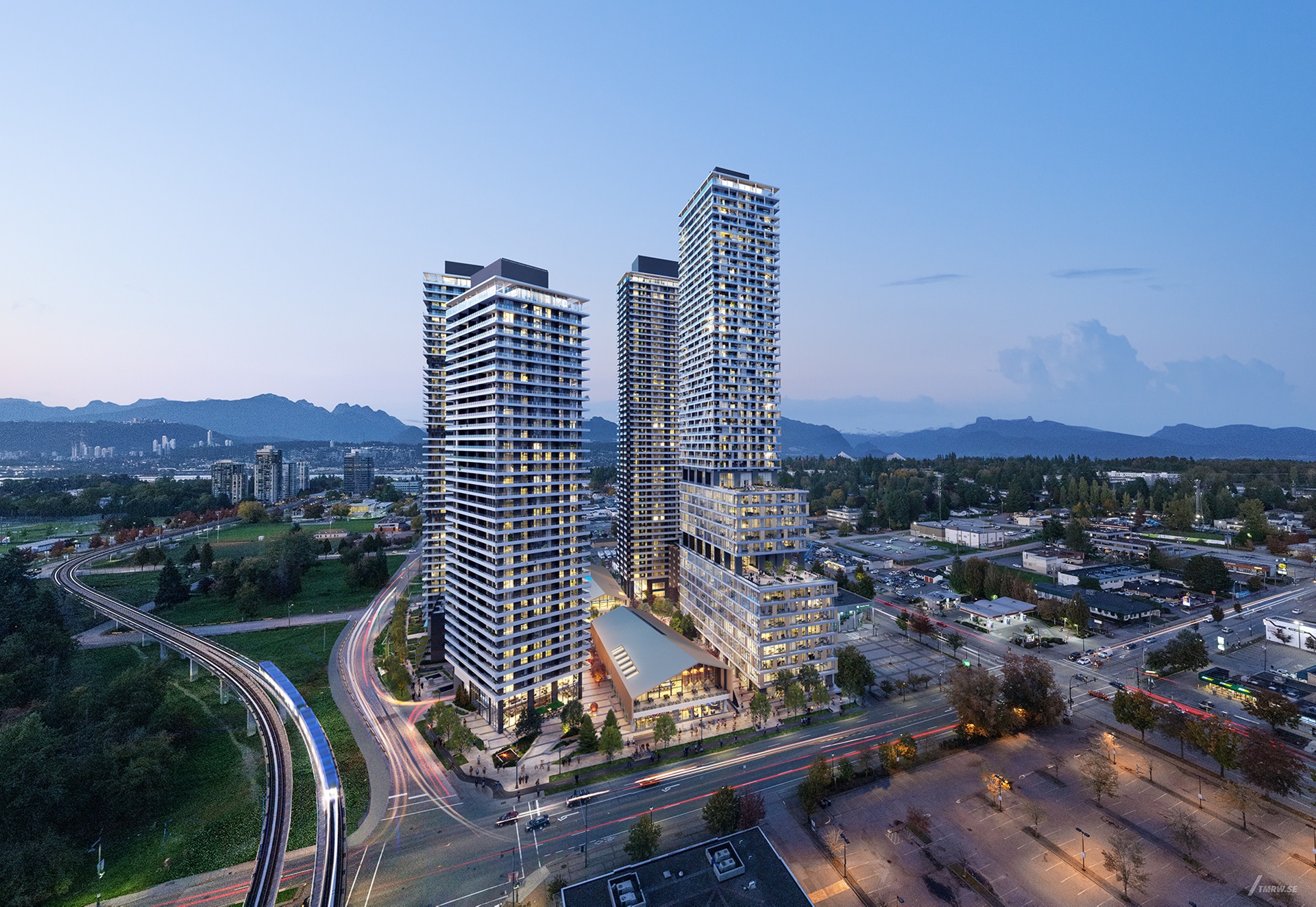 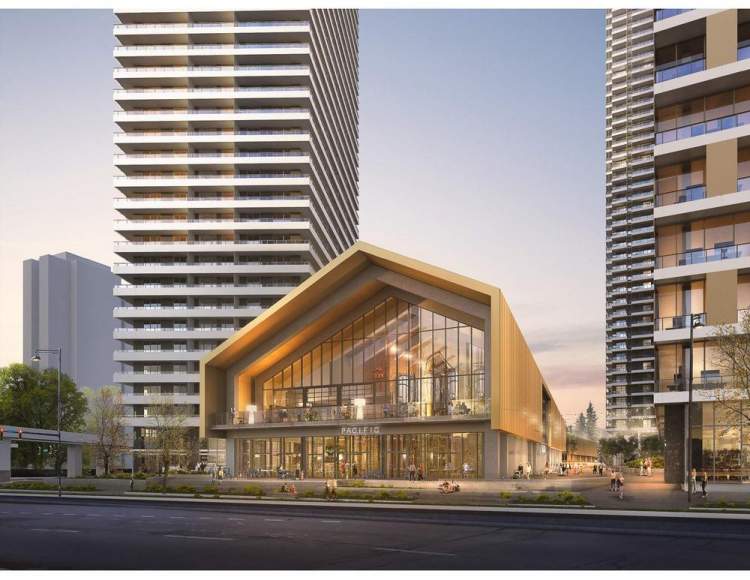 BlueSky Properties are to build a high density, mixed-use, highrise development in Surrey City Centre near City Hall. Called Parkway, it will be built in three phases with one tower per phase. Tower 1, called Aspect, is a 51-storey market residential building with ground floor retail space. Tower 2 will be a 50-storey mixed-use building with ground floor commercial units and a 17-storey office building as part of the podium, while condominiums are to be located on the upper floors. Tower 3 has been slated as a 50-storey residential building with an 8-storey podium containing 200 market rental apartments and condominiums in the highrise.

Located in the centre of the site, along a north-south mews connecting 104 Avenue to 105 Avenue, is a 2-storey amenity building at the north end and a 2.5-storey commercial lowrise at the south. A variety of community gathering spaces include a public plaza at the corner of City Parkway and 104 Avenue, a dog park on the north side of Tower 1, an amenity green at the centre of the site, and numerous landscaped sitting areas scattered throughout. The lively combination of plaza, market hall, and restaurant lining 104 Avenue is intended draw people into the site.

Floor Plans for PKWY | Parkway
Parkway will offer a mixture of 1,138 condominiums and 14 x 2-bedroom townhomes in three towers with the following mix of units:

Standing 51 floors tall on the northeast corner, Aspect is the first available Parkway tower with 510 homes to be released. Informed by efficiency and longevity, floorplans are designed to fit your life — work, play, and all the rest. 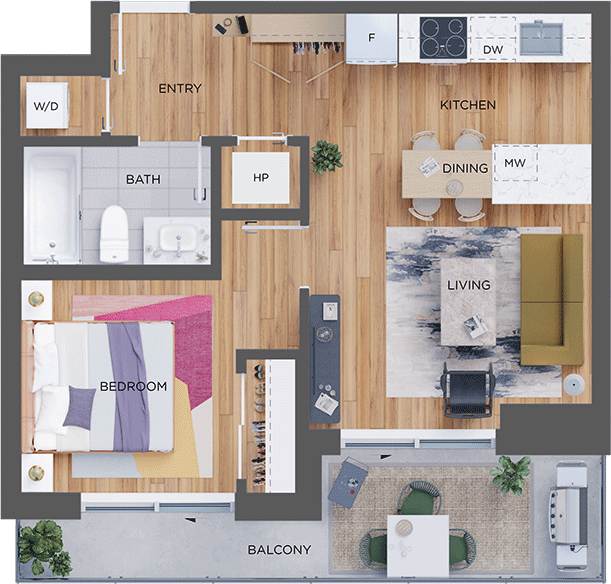 Plan B2: 1-bedroom plans include the BOSAspace ExtenTABLE dining table and functional details such as entryway shelving. 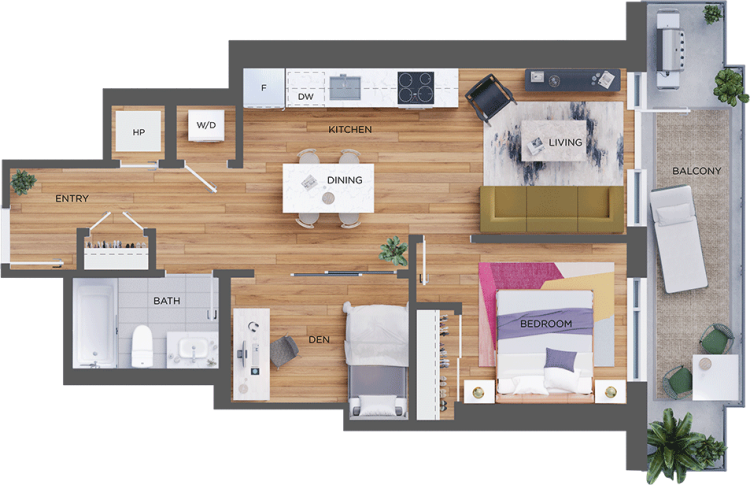 Plan C: this flexible 1-bedroom + deb plan features a den that accommodates both a single bed and workspace, and a spacious balcony. 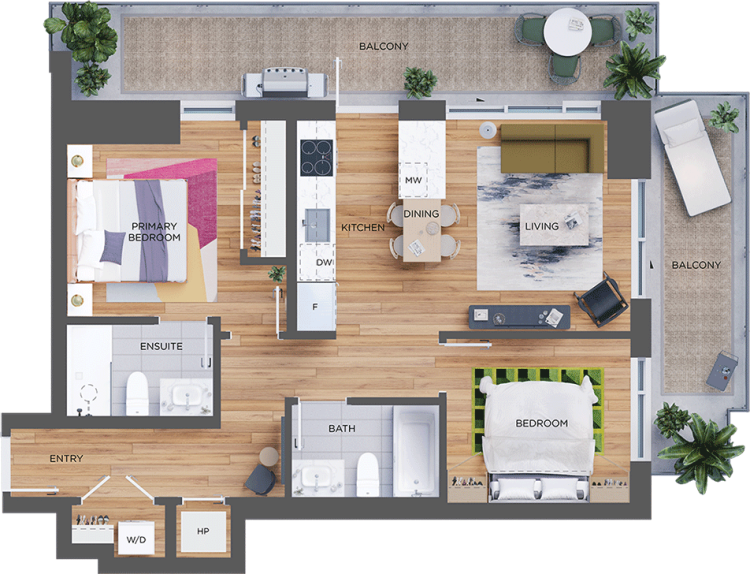 Plan E: this 2-bedroom layout is the largest plan which includes the BOSAspace ExtenTable and wraparound balconies. 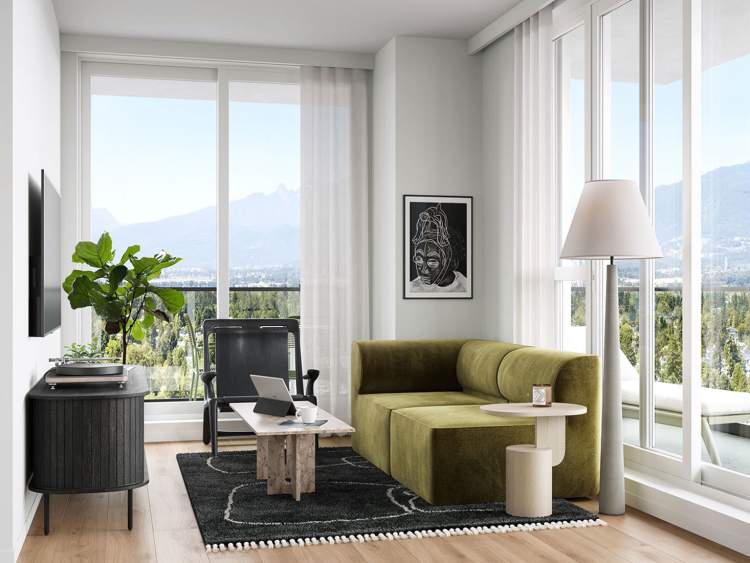 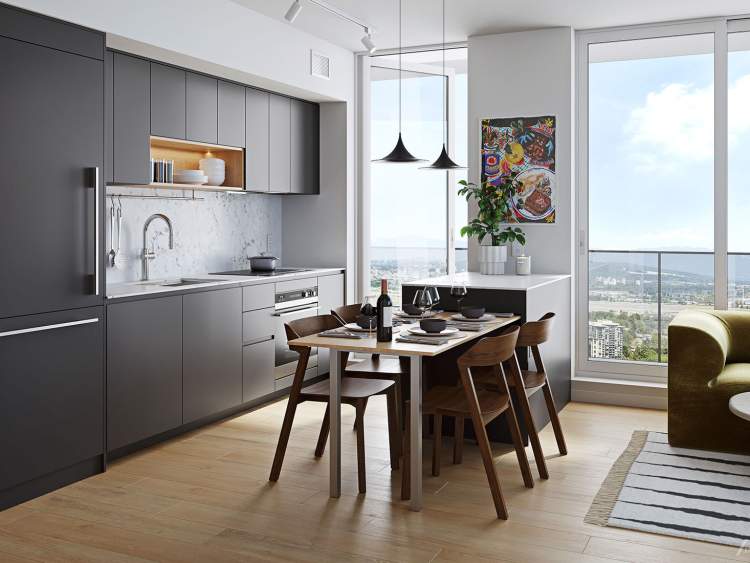 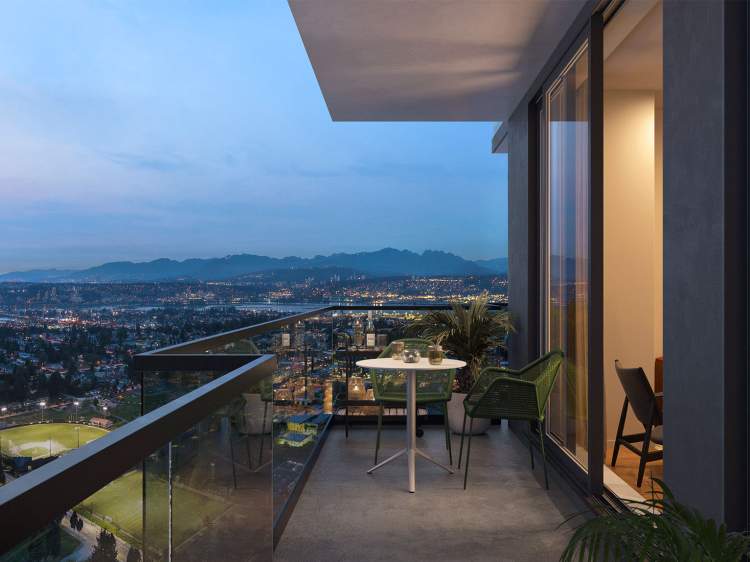 Amenities at PKWY | Parkway
The development’s three highrises surround a publicly accessible central plaza and mews that will feature a lowrise amenity building and a lowrise commercial building that could potentially function as a market hall with a large restaurant or brewery. The plaza will be animated by ground level retail and restaurant spaces in the three buildings fronting 104 Avenue, associated outside seating/dining areas, and social spaces, as well as with landscaping and public art.

The majority of Parkway’s indoor amenities will be found in a dedicated 3-storey building at the northern portion of the site along 105 Avenue. It will primarily function as a wellness centre with fitness and flex rooms for yoga, tai chi, and other related health activities. Each of the residential towers will offer additional indoor amenity spaces. 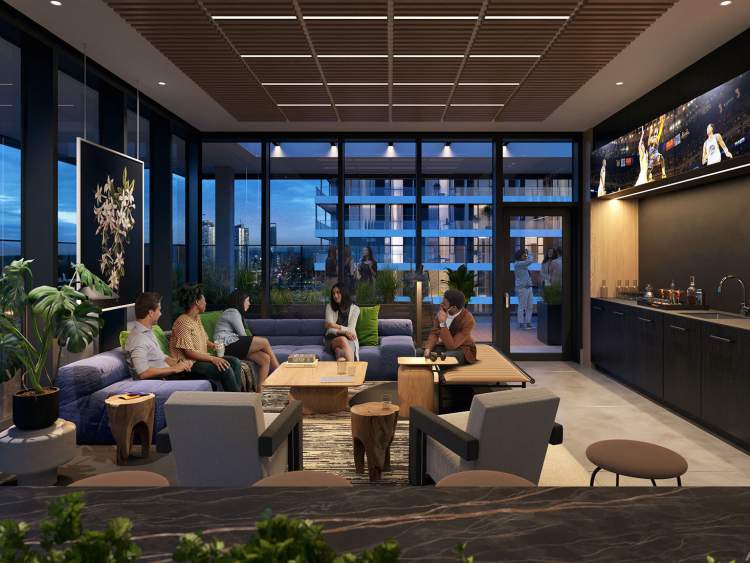 The rooftop Residents Club at Aspect offers a work space by day and an entertainment lounge at night, with an outdoor patio and dining areas for hosting an intimate get-together. 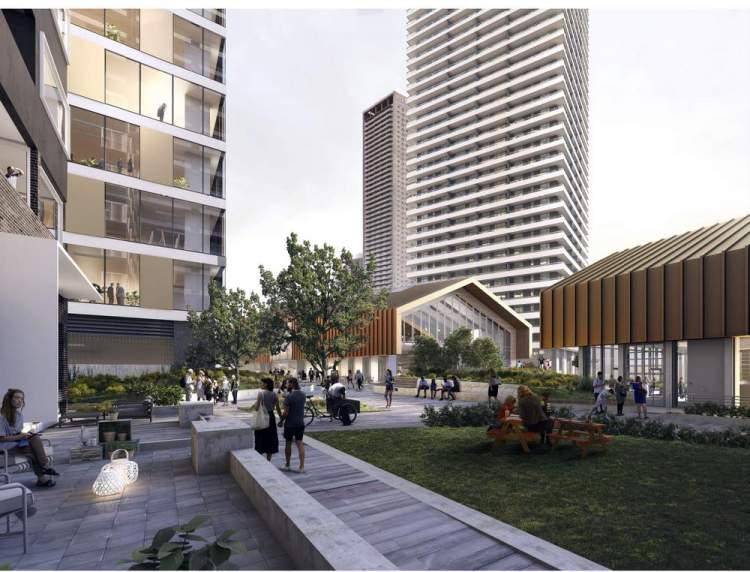 Private and semi-private outdoor amenities are also provided for residents of each building. These include a community green outside the amenity building, play zones, a dog park, seating areas, and landscaped pockets and planters with benches.

Developer Team for PKWY | Parkway
BlueSky Properties is the newest company from Robert Bosa whose career in homebuilding began in the 1960s after immigrating to Canada from Italy. For five decades, the Bosa name has been synonymous with style, quality and extraordinary value. BlueSky is a Vancouver developer that refuses to be boxed in, creating everything from rental apartments to commercial buildings to high-style residences in some of the city’s most important neighbourhoods. Other BlueSky projects featured on this site include SEAandSKY, University District, and Wilson.

Perkins+Will is an interdisciplinary, research-based architecture and design firm established in 1935. More than 2,000 professionals across over 20 Perkins+Will offices include some of the brightest minds in architecture, interior design, branded environments, urban design, and landscape architecture. The recipient of hundreds of design awards and a progressive leader in corporate social responsibility, Perkins+Will is consistently ranked among the world’s top design firms. Projects featured previously include Dockside Green, Fraser Mills, and Ivy on the Park. 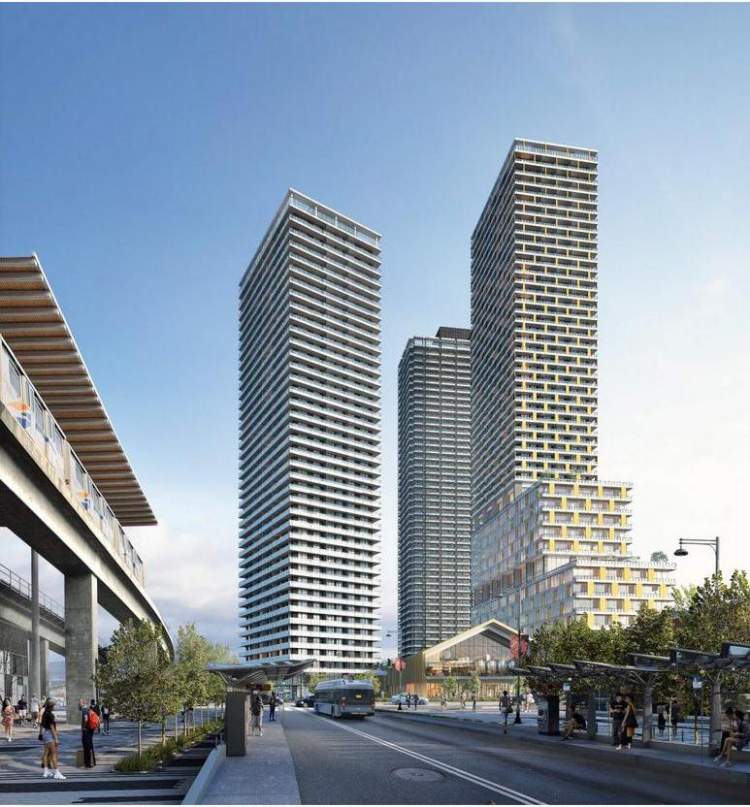 Expected Completion for PKWY | Parkway
Parkway 1 – Aspect is expected to be completed by 2025.

Are you interested in learning more about other homes in City Centre, Newton, or South Surrey?

Check out University District, The Holland, Passages, and these great Surrey Presales!