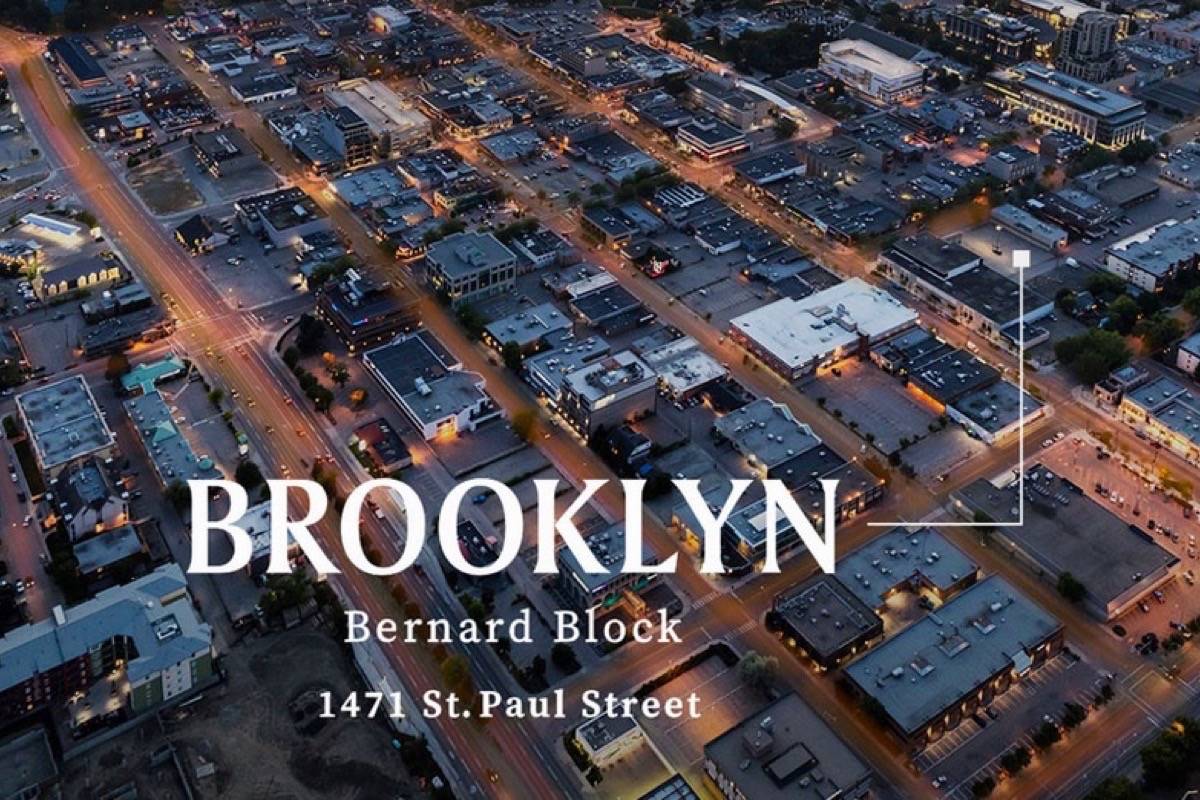 Brooklyn at Bernard Block 1471 St Paul Street in Kelowna BC

Newly named, Brooklyn at Bernard Block is a concrete condominium tower on 1471 St. Paul Street just off Bernard Avenue and part of a three-phase plan that will eventually include two additional condominium towers on Bernard Avenue. Mission Group is proposing a 24-storey condo tower featuring a rooftop lounge and outdoor terrace amenity for residents as well as brick and iron detailing along St. Paul’s leafy tree-lined street.

Be A Presale Condo VIP!

Find Out About New Presales & Get Access to VIP Openings & Special Promotions!

Floor Plans for Brooklyn at Bernard Block
Brooklyn at Bernard Block represents an opportunity for homebuyers to get in early on a high-rise master planned community right in the heart of Kelowna’s Bernard District,” says Randall Shier, president at Mission Group. Its selection of homes includes 1 bedroom, 1 bedroom and den, 2 bedrooms, and a limited collection of sub-penthouses.

The stretch of the main strip where the former Bargain Shop building now stands will be redeveloped as the Brooklyn Bernard Block and will offer concrete condominiums with a variety of size options.

The development site covers an entire city block in downtown Kelowna and totals 1.5 acres. The building has sat vacant for the better part of a decade.

It’s the first part of a three-phase plan that will eventually include two additional condominium towers on Bernard Ave.

Brooklyn is literally steps away from Kelowna’s main street, Bernard Avenue, and close walking distance to a broad range of goods and services. Having undergone a $14 million revitalization, Bernard Avenue has transformed into a vibrant destination with trend-setting local cuisine, creative social houses, boutiques, culture and entertainment destinations.

Developer Mission Group – Headquartered in Kelowna, Mission Group specializes in residential and commercial real estate development and construction. Each Mission Group community is given careful thought and consideration long before construction begins. Their goal to create and nurture homeowner relationships, as well as their modern and well-built designs has earned them numerous industry awards over the years. These include the Canadian Home Builders’ Association Tommie Gold Awards for Excellence in Creating a Low-Rise Multi-Family Development (2016), Excellence in Semi-Detached or Town-Home Development (2016), Built Green B.C. Builder/Renovator of the Year for Winsome Hill in 2012 and Multi-Family Builder of the Year (2014).

Expected Completion for Brooklyn
Sales are set to begin in the summer of 2018, and will be priced in the $300,000 range and up.